I lived in my last flat for about 8 years, and I accumulated a lot of stuff during that time, so much stuff in fact that it took a 7.5 tonne box van to shift it during my recent flat to house move.

And the really sad thing is this: the only thing I’ve done with more than half my stuff in the last six months is to move it out of my flat to storage, pay a lot of money to store it, and then move it into the cellar of my new house, where it remains, now unboxed, but still unused.

Such actions should be sufficient to get me certified as insane, but in our insanely materialist society such actions are actually classified stark-raving normal.

However, I feel burdened by the amount of stuff I’ve got, so I’m on a mission to get rid of most of it. I’m aiming to reduce my stuff down to one small van load which would mean I could easily move my stuff and rent out my house, in case I either want to go travelling (I’m kind of getting the urge.) 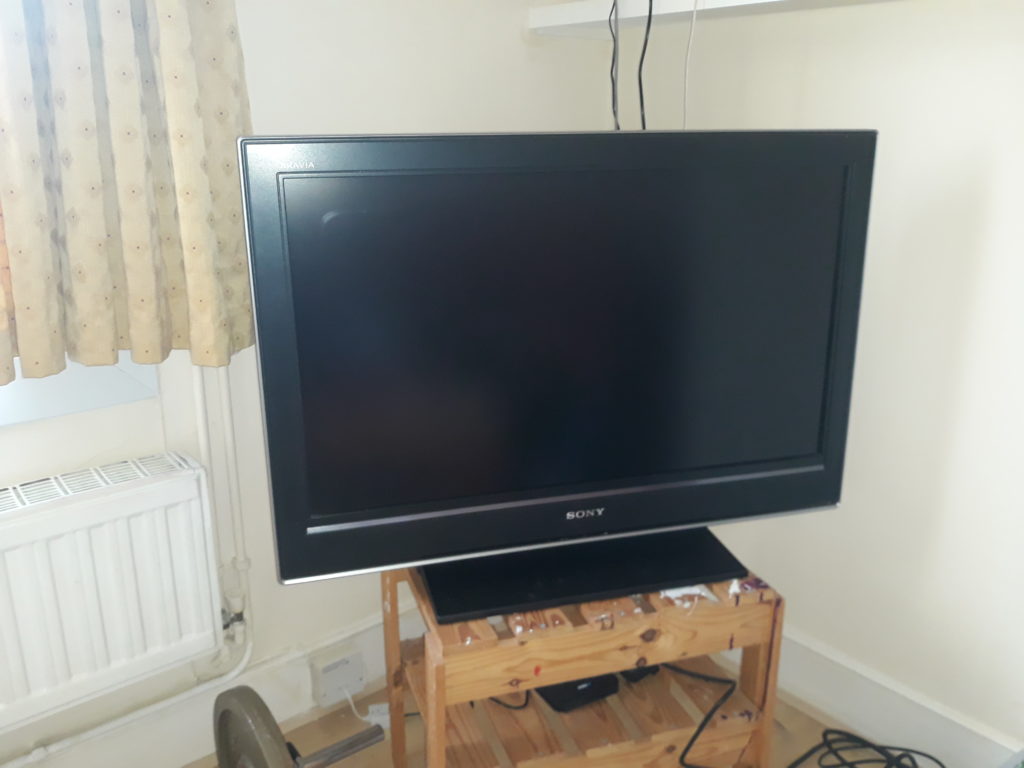 Three months in storage, four months in my new house: seven months since it’s been switched on!

There’s also the fact that I might need to go and find cheaper accommodation in case I fail to close my income gap by the end of 2019, in which case there is no way I’m moving so much stuff again!

Then there’s the fact that I’ve always admired minimalists, and have wanted to become more minimalist for a long time. For me a ‘car load’ minimalist lifestyle would certainly be possible, and probably liberating, but is it desirable, rational, necessary?

What do I need for a ‘car load’ minimalist lifestyle?

This is basically the stuff I relied on for the three months I spend at my Dad’s over summer:

This lot would allow to me work, sleep, go out for runs and walks, and let me cook and have somewhere to sit. Just listing this small amount of stuff feels liberating! 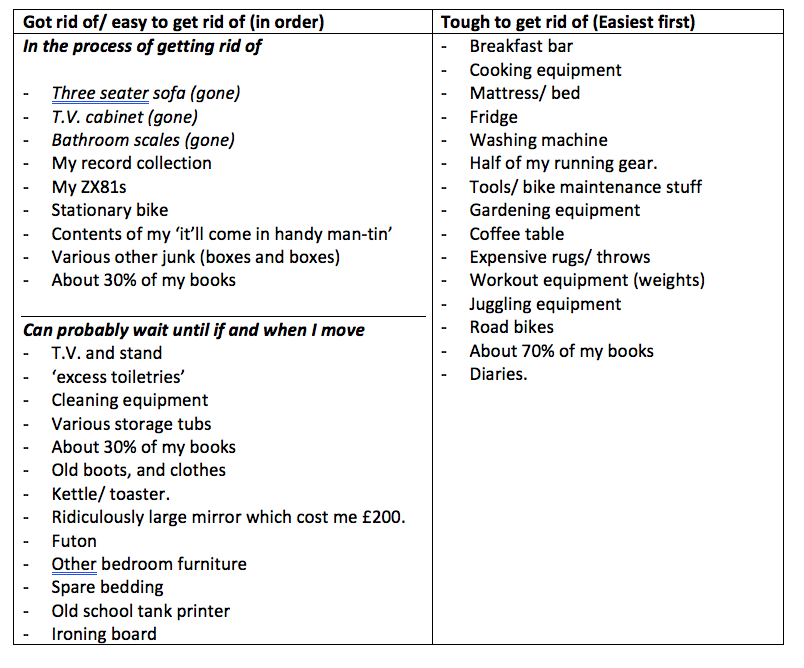 Easy to get rid of

Just the process of putting together this list has actually helped motivate me to get rid of more stuff. The stuff to the bottom left is ‘convenient to have’ but not entirely necessary, the kind of stuff that it’s pointless getting rid of it NOW because I will use it at least once a week or more, except for the books, I just like them!

Why is some stuff tough to get rid of?

Some items are either difficult for me to part with because they are expensive to replace items that save me money (the washing machine, tools, bread tins within cooking equipment for example), or just because of sentimentality – my weights collection for example, I’ve had those since I was 12! And books, they are absolutely the hardest thing for me to axe…and they’d be quite handy to have in the background when I next update my various profile pictures in 2025 FFS! 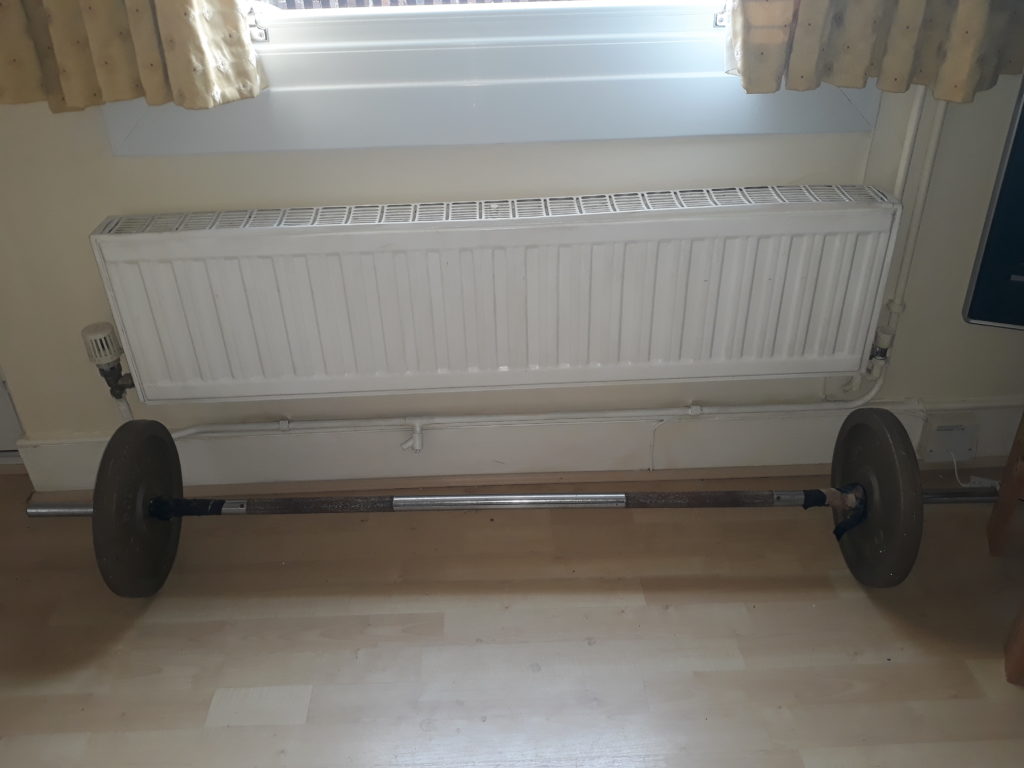 Much happy lifting, 33 years of ingrained sweat, and very little muscle to show for it.

I really don’t think I need to do depth-analysis on this for myself…. I like the stuff in the right hand column above because it’s economically rational to keep it (because it has genuine use-value), or because it has long term sentimental value…

At least now I’ve got a clear idea of what the ‘sticking points’ are… so if I do get deeper into minimalism, I know what I need to work on.

Not leaping to chuck things out just for the sake of it….

I think this is pretty important. I like the feeling of being free from stuff, but at the end of the day, a lot of my stuff is useful, and plays either plays a positive role now in saving me cash (washing machine compared to laundrette!), or could do in the future (gardening tools, push bike).

Also pushing towards ultimate minimalism may not be necessary – I’m really just hedging here…. My income is increasing quite rapidly, but its continued growth is really dependent on my being settled. We’ll see.

It’s also occurred to me that my focusing on my stuff might be a distraction away from what I really need to be doing….. just keeping my house tidier and meditating more: i.e. cutting out mental shit rather than material shit? Maybe?!?

P.S. The possibility of ditching the car or upgrading to a van is on the agenda, but just not what I’m focussing on ATM!