And a few thoughts on what I should delegate more to, and on the difficulty of making comparisons!

In this post I’m simply going to review the return I get on some of my delegations, which are summarized in this spreadsheet here, and below: 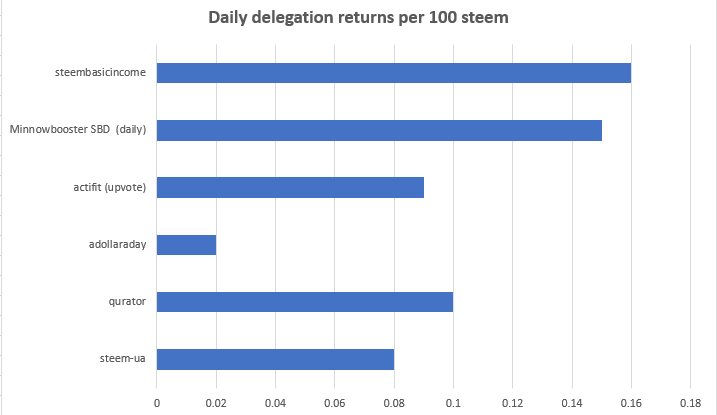 I haven’t included everything I delegate to, and have added in SBI for comparison. To work out the returns on upvotes, I took the value of upvotes received from the relevant accounts for the last three-five posts and averaged them, then worked out return per 100 steem. NB the ‘daily returns’ are only right if you post daily, which I have been doing lately, just about.

@Steembasicincome tops my league tables. While not strictly a ‘delegation return’ it works in a similar way. The only slight problem here is that the tool which allows you look up how many shares you’ve got (1 share = 1 steem) doesn’t work, so I had to approximate my investment, I used 200, I’ve definitely put in less than that, so it’s the best return of the schemes above. Definitely going to delegate more.

@Minnowbooster offers the second best return. You get paid out daily in SBDS. Hold delegation, for now.

@qurator comes in third. This has a number of tiers of upvotes. NB Some of this upvote value comes from the fact that I upvote the qurator posts to a certain value, so strictly speaking my delegation upvote value is slightly less than this! Hold delegation

@steem-ua – the value of their upvotes seem to be up and down somewhat. Mostly down recently compared to what looked like quite nice phat upvotes initially (despite my ranking going up). Haven’t quite got my head around this one. No idea how the algorithm works or what ‘ranking’ actually means and TBH I don’t find the automated responses on every post I get useful either. Hold delegation, it’s quite an intriguing project

@actifit – you have to actually post using actifit to get the upvotes, and you get an upvote (for over 5k steps) even if you don’t delegate. I compared my pre-delegation posts with my post 35 SP delegation posts and notice an increase of around 0.03 per post, meaning a per 100 SP upvote value of around 0.09. NB you also get a small delegation payout, but it’s so small it’s not worth mentioning. Gradual increase in delegation

Special mention to @adollaraday is @pennsif’s charity account: it may be a small upvote, but it’s good to get anything back, given that ‘return’ isn’t the point! Will probably delegate more in the future, ethically top of the league tables!

I’d also like to give a special mention to @steemhunt – I delegate 200SP to this and you get rewarded in a small weekly pay-out and tokens. I haven’t included it here because It’s quite difficult to work out a return given the tokens and levels involved, but my last two hunts (amounts not related to delegation) got an upvote of around the $2 mark, so if you’re looking for something to get involved with for a return… check out @steemhunt! Will increase delegation if I can find the time to use the platform!

This has just been a quick rough overview of my own returns. No one should use this information as a basis for changing their own interaction on steem.

When I say I’m going to delegate more, I’m going to keep the balance of my own usable SP and delegated SP around the same.

If you know of any other good delegation schemes, do let me know! Similarly, if I’ve made any glaring errors, let me know and I’ll correct them!