Well I finally managed a screen-free day, despite having a mild hangover.

I say day: I didn’t get out of be until 9.05 and I finally caved in to watch an episode of Star Trek over dinner @ about 17.30, but I think 8.5 hours w/out screens, and w/out ‘checking in’ with any of the following is pretty good going:

What I did manage to get done is a whole load of things:

Actually it’s not a staggering amount of things done TBH, but then again the main aim of the day was to .NOT do the screen thing during daylight hours. Achieved!

O.K. I am sitting here in front of a screen as we speak, but i feel a lot calmer. I actually feel as if just forcing myself to do this has had an immediate effect of putting me more in control of screens and the ‘flitting between windows’ that typically goes with my use of them. Actually TBH, I don’t think it is so much screens, that’s just a convenient colloquialism… its more fragmented flitting around the net that I think I’ve jolted myself out of today.

I’m now sitting here in my office after lunch doing ‘steem duties’, rather than just slumming it on the couch flitting between steem and some shit on Netflix. I’ve done my usual trawl alters on Partiko, check in with the Drugs, done steemmonsters thangs, adjusted some autovotes, powered up, and now I’m sitting here with one window open just writing this. It’s all focused.

I think the new habit I’m now into is treating anything to do with screens as ‘work’ and with ‘caution’. I can’t live without them, but I can fairly easily (it turns out now I’ve done it for a day) reduce my screen time radically.

Today was easy, a Sunday, a planned for screen-free day (if not evening), tomo’s gonna be more of a challenge when I need to sort out the blog…. but I think I can carry the spirit of fragmentation-free screen time forward….

I’ve actually just moved all my charging stuff to my office and out of my bedroom and put my sleep cycle app on my old phone – I’m ONLY going to use lap top, ipad, phone in my office. Every other room will be screen-free. 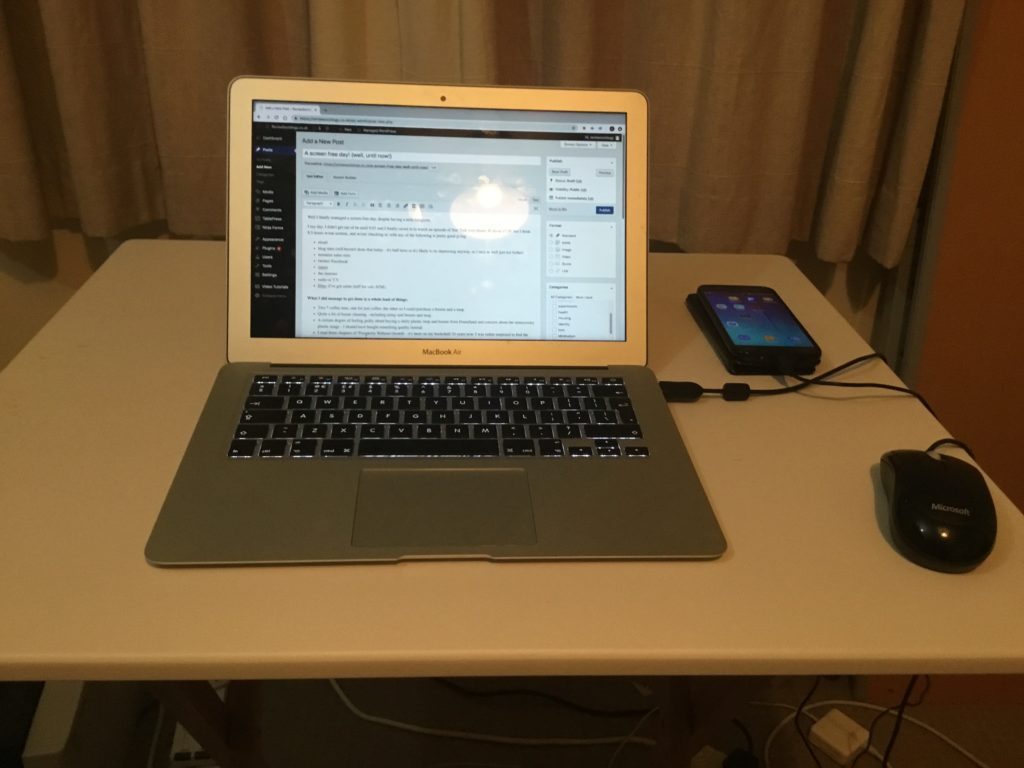 Going to try and only use screens here, and no where else in the house! Must get around to putting my large desk together at some point too!

I also plan to be free for at least two hours in the morning, then for three hours in the middle of the day while I do run/ gym/ sauna/ lunch, and then 2 hours around yoga/ dinner/ tidying.

Then any other screen usage is just one word document and as few net windows as possible open.

Right, so I’m now gonna do my @actifit post from my office and then leave my damn phone in here overnight…. 12 hours until my next screen usage.