This is the sixth in a ten part series on my interpretation of the Buddha’s Noble Eightfold Path…. or ‘eight things you should do to realise enlightenment’. 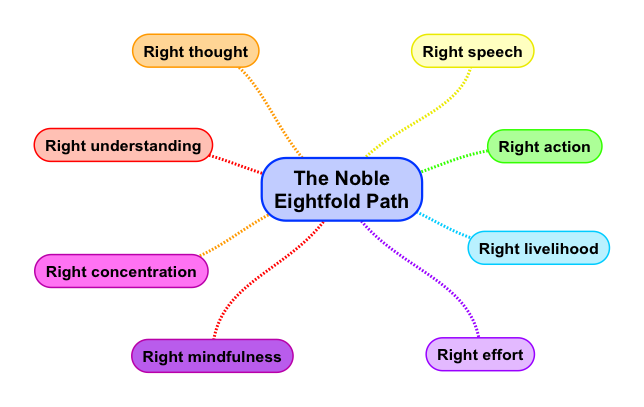 Right Livelihood primarily concerns making the effort to earn a living without harming other people, and without compromising the five precepts. There are two arguments for paying attention to right livelihood. Firstly, we spend more time working than anything else and this will have a great effect on the mind and secondly, it is very difficult for the individual to change while living in a corrupt society and it is thus logical that one makes some effort to transform society into one which would make it easier to follow the path.

The Buddha explicitly stated that the lay person should avoid any livelihood which involved trafficking in human beings, slaughtering animals; the selling or poison or anything which stupefies the mind, as well as dealing in weapons of war and killing.  Many Buddhists today (see for example Richmond 2011) extend their interpretation of right livelihood to exclude a much broader range of careers than those suggested by the Buddha, such as avoiding working for those companies who profit from such things as the exploitation of sweat shop labour, pollution, and animal testing. For example, according to the Zen teacher Thich Nhat Hanh (1998)

“To practice Right Livelihood you have to find a way to earn your living without transgressing your ideals of love and compassion. The way you support yourself can be an expression of your deepest self, or it can be a source of suffering for you and others…. Our vocation can nourish our understanding and compassion, or erode them. We should be awake to the consequences, far and near, of the way we earn our living.”

– Firstly, there are those which are absolutely wrong and should be avoided such as those listed by the Buddha.

– The second category of career consists of those careers which increase peoples’ greed such as advertising and creating unnecessary luxury goods that people need to be tempted into buying.

– Thirdly, there are those careers which can be rendered suitable with an effort, which will incorporate most careers

– Fourthly, jobs which do not require too much mental strain are seen as desirable because they allow one to work while maintaining peace of mind which is conducive to enhancing right concentration and meditation.

– Finally, the ideal conception of work is right livelihood as a vocation – where there is no distinction between work and play and so one’s career is a path. Careers in the caring professions generally fall under this category.

One final point is that Right Livelihood could also involve one leading a frugal lifestyle and spending as little time as possible earning money so that one can spend more time studying Buddhism and meditating.

While the Buddha limited his discussion of right livelihood to the economic sphere of life, Sangarakshita (1968) suggests that this aspect could be interpreted as incorporating the transformation of the whole of the collective life and how one engages with the wider community and society. His argument is that it is very difficult to change oneself while living in a corrupt society and that in such a situation one has to make some effort to transform the society one finds oneself in. In this respect, right livelihood is about creating that society which makes it easiest to follow the path.

‘Getting work right’ makes sense because most of us spend more time working than anything else and work thus offers us the most obvious opportunities to practice the other aspects of the N8P. Our livelihood is also the means whereby most of us will have an effect on the wider society, and if we engage in a non-harming and ideally useful career we are more likely to create and sustain a peaceful social environment which in turn is conducive to developing a stable peace of mind.