I hadn’t originally intended to go to Auschwitz-Birkenau during SF3 – I’d assumed I already knew enough about ‘that particular genocide’ from school history lessons and various wallpaper WW2 history documentaries.

‘Fortunately’ I was talked into last weekend by a couple of friends at a beer festival – one who’d been to Dachau (his grandfather died there), and another who’d visited Auschwitz in April – the general line was ‘it’s horrific, it’s emotionally draining, but you’ve got to go.

They were right, and I’m glad I went… the trip gave me a lot to think about. NB I’m not sure if ‘getting your intellectual juices flowing’ is the intended outcome of a trip to Auschwitz… I think the desired response is more of a somber emotional global solidarity-building one, but as as a left/green/anarchist leaning (somewhere around there) leaning Buddhist that’s pretty much my default state of being anyway, so I’m already there on that front.

Hence this post is just a quick insight into the 2.5 hour tour and then a few sociological/ analytical insights into the terror  that was Auschwitz-Birkenau (I’ve had to teach the causes of genocide as part of the A-level sociology syllabus since 2015, so I’ve got some limited sociological perspective on the topic).

NNB – I’ve only got two naff-photos: not my thing photography, but I’m  sure there’ll be plenty of mood-photo posts hitting your stream sometime soon from one of the other 80 or so steemians in morbid attendance.

And soz about the formatting – on the pad. 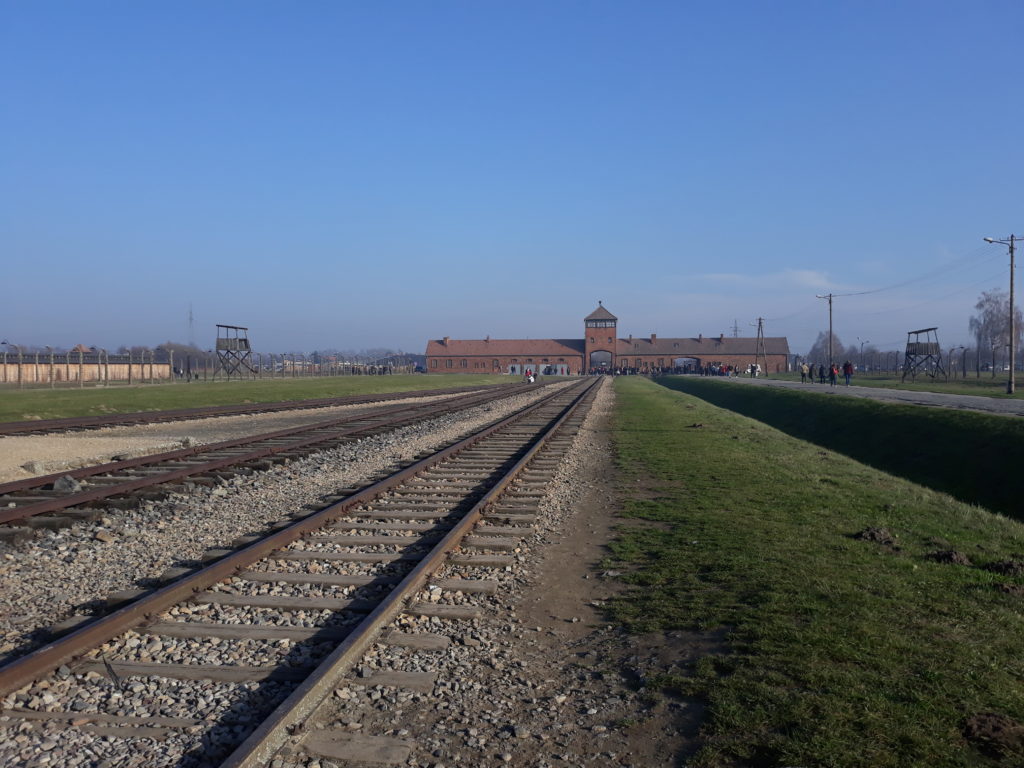 ### Auschwitz Birkenau: A very brief overview of the tour….

The tour is in two sections – Auschwitz 1 and then Birkenau. We actually did the tour in reverse> because of the crowds at Auschwitz I, we went to Birkenau first, but I’ll do it in the normal order…

This is the first part of the concentration camp which has the original brick barracks in which the prisoners stayed: it’s where all the exhibition items are, which mainly consists of models of the living conditions (very cramped to say the least), numerous actual items of some of the prisoners – such as shoes and suitcases and a rather morbid display of human hair which the Nazis sold on to German companies.

You also get to see the ‘punishment cells’ where the first trials of cyclone B were carried out – a chemical originally used to kill rats, later used to kill people.

Finally, as the tour ends, you can see the Commanding Officer’s (very nice) house just a stone’s throw away from the complex, and then the first small-scale gas chamber and incinerator (for human bodies).

Birkenau is the second part of the tour and a much larger operation. This is basically where the Nazis ‘scaled up’ to their ‘Final Solution’.

There’s a lot of walking in this second half (at quite a pace too!). Birkenau is the place where the trains come straight into the middle of the camp, where Jews were then separated into ‘work camps’ or ‘gas chamber’ – 80% were sent straight to death. Their belongings were also sorted at this point and anything valuable sent to the Reich.

Ahead of the ‘departure point/ sorting area are the remains of two gas chambers (there were originally four) – besides that there are two segregated prison areas for men and women.

There is also a third section where younger fitter men worked dealing with  the dead bodies: clearing them from the gas chambers to the incinerators.

Auschwitz-Birkenau is a horrifically morbid spectacle.. you can’t help but put yourself in the shoes of the victims – but it’s a tiny tiny glimpse into just how horrific the experience must have been – I don’t think it’s possible to actually really feel that level of horror if you haven’t gone through it – in the same way (times 1000) camping out on the street for one night can’t really make you feel what homelessness is like (trust me, I’ve done both).

I also think the true horror of Auschwitz isn’t just the immense suffering of the victims, although I donut want to belittle that, it’s also about what Hannah Arendt calls the ‘banality of evil’…

### Auschwitz and the Banality of Evil…

The general idea here is that the people who worked at Auschwitz were (for the most part) just ordinary citizens…. 10 years earlier they would have doing regular jobs

The best exemple of this is Adolf Eichman – who was instrumental in organising the exportation of Jews from Hungary and responsible for the deaths of around 500K people.

He was just a bureaucrat – As far as he was concerned it didnt matter whether he was organising car manufacturing or shipping humans to death camps  – he was just doing his duty as efficiently as possible.

Here’s a quote following his trial for war crimes…..

‘I regret nothing. I was one of the many horses pulling the wagon and couldn’t escape left or right because of the will of the driver….I obeyed the laws of war and was loyal to my flag.’

The findings are basically that 75% of people will obey authority figures when they tell them to harm others.

### Modernity and The Holocaust

As a closing thought… I’ll recommend the above book by the sociologist Zygmunt Bauman – he was a Polish Jew who escaped into Russia and then had to escape the communist purges under Stalin – he settled in Leeds.

His general view is that the Holocaust was the logical end point of s modernist world view – obsessed with there being ‘one truth’ and with most efficient way to get there… as in the ends ultimately justify any means.

He devoted his life to developing a postmodern ethics (rather than just an anything goes postmodernism)… he never proscribed any political ideal or way of life but left us with the message (he died recently at the age of 89) that learning to live with differences is the the most challenging yet most important task facing humanity.

He was one of those super renaissance style intellectuals, one of very few people to have escaped two genocides, and his solution to how to prevent another one: it’s down to the next generation to figure out!

In other words: don’t be passive (also the lesson from Milgram) – be wary of people claiming to have found the ‘truth’ or ‘the best way to achieve a goal’ – get involved, challenge them and hold them to account. A better world should follow!

That ended up being a bit more gushing than anticipated!