So I just broke a pint glass….. 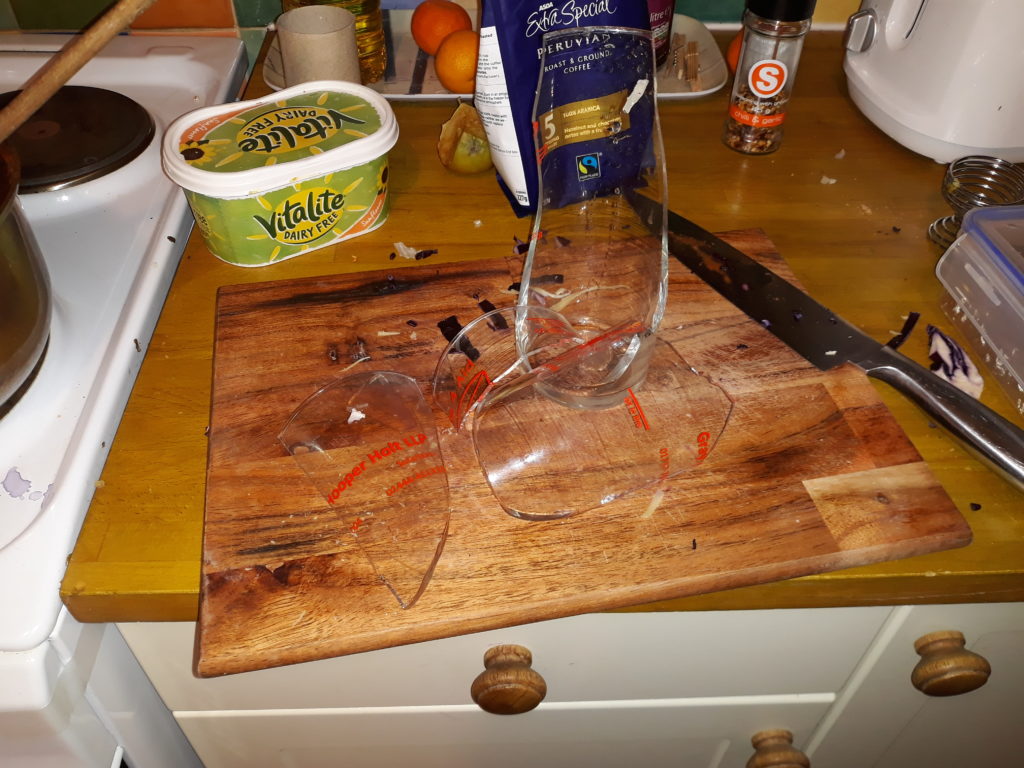 Excuse the post dinner carnage, the glass slipped off the draining board as I was clearing it to do the washing up, so I just dumped the remnants artfully on the dirty chopping board.

After the initial minor shock at the glass breaking (it’s been a while actually)… i.e. the sound and the annoyance at myself, my next reaction was actually one of relief…. I sort of said to myself ‘I really needed to get rid of some pint glasses anyway’.

Then the profound moment of realisation….

Just chuck everything out.

I’ve been feeling in this ‘clear out’ mood for a while now, ever since I moved too much fucking stuff with me from Surrey to Hereford, but I’ve been working on increasing my passive income rather than being mercenary about clearing out my shit. I’ve got rid of some – I managed to offload my sofa and ridiculously large TV cabinet with the BHF last week, but I’ve been going a bit slowly with the minimalism shift.

But this glass moment, this relief, this tells me I’m on the right track with getting rid of stuff, and that maybe I just need to speed the whole process up.

less is more: what other way forwards is there anyway?

It’s not just stuff either, it’s habitual ways of action and generally being busy… I think I need to spend a lot more time just ‘sitting there’ and ‘doing less’.  I don’t want to call it meditation, I prefer ‘just sitting’, or just doing basic tasks…. cleaning, walking, cooking, eating (enough), stretching, and just the basic chores of life.

Just cutting shit out…. that’s what I need to do more of, that’s what the glass incident not so much taught me, but reminded me of: it’s time.

Kind of fitting too, if you know the story of the monk, the professor and the overflowing cup (read glass), where the monk keeps on pouring tea and when the professor objects, he gets told ‘this is like your mind, overfull’.

Except I’ve just had the universe smash my glass: same lesson, just with a more urgent tone.

Perhaps I need to dump more shit on the blockchain too?!?