I’ve had one of those days, at the end of one of those weeks, carried over from last week, during which I seem to have been playing catch up with all of my shitty chores, and with half of them yet to do*.

You know the sort of chores: paying bills, updating software, filing, shaving your head, cutting your toe nails**, finally getting round to putting up a proper desk and then realising you can’t find the right screws and having to take a 2 hour round trip to Screwfix via a coffee and cake, and so on and on the list goes.

These are those kind of occasional chores which you can’t  quite fit into you weekly chores schedule: the food-shopping, cooking, perpetual washing up, clothes washing and drying (much more pleasant now I can do it outside again!), of course your ablutions and so on.

These chores would be a little less frustrating and/ or annoying if they didn’t take so damn long, but they always seem to end up taking several times longer than you plan for them, mainly on account of the fact that they are occasional and you sort of forget the drill…  for example I went to the bank today to pay a gas and electricity bill (I don’t want to set up a DD yet on the back of a winter’s payment) and forgot my card because my bills account isn’t the same as my day to day spending account, so that was a waste of 10-15 minutes, and the desk thing…. I’m sure I’ve got those screws somewhere? It took me 5 minutes to wiggle the connector out of one of the holes, after fetching the pliers from the cellar, you know the sort of thing.

The nadir of this whole perpetual chores cycle debacle was today’s efforts to get a parking permit for the local area – I realised on Friday that my current one runs out on Monday (at least I realised, the enforcement around here is EFFICIENT!)… two phone calls (two departments), the necessity to register my car at my new address, then the realisation I should do my driving license, and insurance (oops), a trip to the local council office, a redirect to another office, a return home to get my proof of address (which I didn’t actually need, but I still think I was right to pre-empt it), and i finally got one ordered.

Then on my way home I noticed that all the parking signs around my house are zone 3 and the stupid woman in the council office told me I needed zone 2, so that means I need to go back there tomorrow.

So then there I am back home after doing all of these various shitty chores, admittedly after spending too much time tossing about on steem this morning and taking 2.5 hours to go and do some interval training, and it’s 16.00 already, leaving me a dismal hour to brush up on my theories of  assessment, curriculum development and evaluation for my teaching session tomorrow (and trust me, that really is as exciting as it sounds), I’d planned to have nearer three hours. 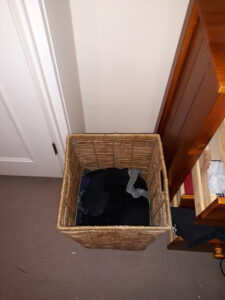 I think the real dark side of the day’s nadir came when I took my washing in and noticed a particular jumper I wanted to wear tomorrow still in the wash basket, from last Tuesday, unwashed, even though I’ve actually done 3 entire loads of washing since then. How the fuck did that happen?

How the fuck did that happen?

Well, I’ll tell you… it’s a result of my having been subjected to 2.5 days of work last week, that’s what it is! I had to work two hours last Tuesday, and then ALL DAY Wednesday AND Thursday…. and then I had to get fairly drunk on Friday AND THEN AGAIN on Sunday to get over it, bloody shock to the system.

Perhaps I’ve been spoilt with 8 months off and I just have to adapt back into a new routine now I’m having/ choosing (it’s somewhere between the two) to actually go out into society and work again. That’s probably it!

Or maybe it’s unconscious cognitive dissonance (or is that by definition unconscious?).. In my head I should now be earning a passive income from advertising revenue, resource sales, supplemented by tossing about on steem, but it hasn’t quite worked out like that, so I’m finding I need a little regular paid work to secure my income.

I’d better sort myself out before April, because that’s gonna be another step up…. I’ve got three full days of work coming up in the second week, three days in a fucking row, on top of a one hour webinar every Monday evening!

I’m left bemused as to how I managed to cope working full time for 16 years without everything just going to shit. How the fuck did I ever manage that? Was that just being younger?

(*Left wondering whether that sentence maybe wanders in tense a little too much?)

**unless you’re @fyrstikken who apparently has a weekly pedicure.