Up until 2016 it was only possible to ‘like’ posts and pages on Facebook, it wasn’t possible to ‘dislike’ them in any way.

This was a conscious business decision by the company so that the platform promoted a positive atmosphere of affirmation, rather than one of disagreement and discontent.

It was also motivated in large part by Facebook’s desire to create an atmosphere which was attractive to and comfortable for big businesses, who want to promote their brands in an environment which encourages positive feedback rather than criticism: this makes their products seem more appealing and increases sales, which in turn means they are prepared to pay Facebook more for having their posts promoted.

NB – if we go back to 2015, 95% of Facebook’s revenue came from advertising, so it should be absolutely no surprise that the entire platform was geared towards promoting an ideology of liking.

Fuchs (2017) points out one of the problems of this ‘like ideology’ which prompted some changes recently: in 2013, The Auschwitz Memorial page posted about 656 Dutch Jews being murdered in the gas chambers on the 1st November, which received several ‘likes’. Now, assuming that all of these likers weren’t Neo-Nazis, these people probably wanted to express their sympathy with the victims, but the flippant ‘like-bias’ inherent on Facebook at that time had turned real-world Auschwitz mourners into virtual ‘Auschwitz likers’.

Over time, sufficient people complained about the limited one-dimensionality of the restricted like and in 2016 Facebook introduced a new reaction bar which included, alongside ‘like’, ‘love’, ‘Haha’, ‘Wow’, ‘sad’ and ‘angry’. You’ll recognise this straight away if you use Facebook (NB – I don’t, I only just found out about it!)

(If you look at the responses to recent posts on the Auschwitz Memorial page, ‘sad’ is now the most popular, which seems somehow more appropriate)

While the ‘six emotion’ response obviously offers a greater range of emotional expression in response to posts, it is still subtly invites users to provide positive feedback:

Once Facebook has steered its users into liking or loving whatever corporate content has been promoted to the top of their feed, if you click on some of this content, you get to see how many likes etc, but you can only easily see the top 3 out of 6 responses…..in the case of the coke advert below you see only purely positive responses. There are no visible ‘sads’ or ‘angrys’. 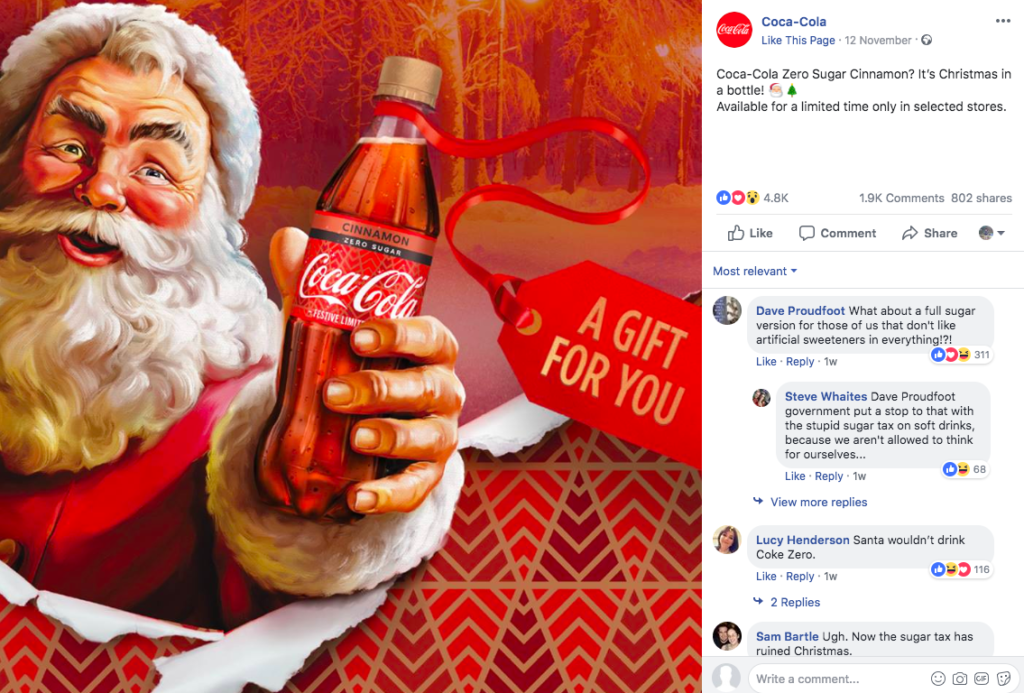 In reality, there must have made some people click the angry or sad button (there’s enough reasons to!) but these responses are rendered invisible by the way the information is displayed.

For Facebook users who don’t follow any critical feeds, they will likely get the impression that ‘everyone loves our biggest brands’, whereas in reality this is a ‘emoticon illusion’ created through a behind the scenes stitch up between Facebook and the corporations behind those brands. It is, after all, in both their interests to hide any legitimate critique because higher profit for Coke etc means more advertising revenue for Facebook.

While I am aware of the fact that Facebook overtly cencors some comment, by deleting certain comments, this sublter background design tactic is maybe far more signficant in keeping the public passive, simply by maintaining the cosy-illusion that we all love good old corporate capitalism.

This post was produced for educational purposes, presenting a possible point of view on the above topic to facilitate discussion.