Globalisation refers to the increasing interconnectenedness of people and localities across the world, two consequences of which are (a) time-space compression and (b) time-space distantiation.

Time-space compression is where interactions across space speed up – it takes less time to communicate and travel across different localities, such that the world feels subjectively smaller.

If we take the above ‘starting point definition’ of globalisation it’s hard to argue that it isn’t occuring, but once we start to break it down and examine different aspects of globalisation (such as: cultural, political, economic and technological aspects) then it becomes a contested concept as questions arise about the pace of gloablisation; the signficance of its impact in different locations,;whether it is inevitable or in reverse in some regions, or indeed, whether ‘gloablisation’ is really just ‘regionalisation’; the extent to which it is a one-way spread of Western ideas to ‘the rest’, or two-way transformative process; and the extent to which (different aspects of) globalisation challenges ‘tradtional’ global power structures – the nation states and the global corporations).

in this post I’m just going to churn out a few thoughts on the relationship between steem and globalisation.

NB – this is very mch a ‘first thought’s free-write type of post!

Steem as home to a critique of the Nation State

One of the biggest selling points of steem is it’s anti-cencorship ethos: anyone is free to set up an account anonyously and post anything. Of course the community can ‘invisibilise’ any post or comment by flagging, but once something’s up and past it’s pay-out window, it’s immutable…. meaning even governments can’t take a critical post down, unless they simultaneoulsy close down all the steem severs (whereever they may be located).

To my mind this makes it a natural home to any group suffering oppression at the hands of a nation state, somewhere they might seek global support, and even funding in their fight agasint state oppression.

It’s also a natural platform for anyone whose suffered cencorship at the hands of Facebook to flock to. @ura-soul’s written about his experiences of cencorship on Facebook, and he’s not the only one.

It’s maybe thus no surpirse to see that steem seems to be something of a home to numerous anarchists… 8000 posts have been written under the anarchy tag, with SBD payouts of 500K. While this is nothing compared to the number of posts and payouts on topics such as ‘life’ and ‘crypto’, ‘anarchy’ is still a top 30 tag on steem, which makes it much more visible than it is on platforms such as Facebook and Twitter.

Another significant anti-statist thread running through steem is prepping and homesteading – there are a lot of such blogs and vlogs arounnd, and while not all of them are anti-state, a lot of them are… @wwf is a great example of this.

Finally, it’s not my thing, but I’ve also noticed a lot of pro-pot posts on the chain, which is bold given that it’s still illegal in most countries and most states in the U.S.

Whether steem has the capacity to go beyond ‘critique’ and ‘defence of freedom of speach against censorship’ I don’t know…. I’m actually a litle concerned if does start to play such a role: it could start to get used by politically violent groups, which might test the durability of the network: think about it – if Al Queda started burying their material on steem, MI6 are alterted (the trackers are no doubt already in place), and the witnesses just say ‘soz it’s an immutable ledger’… do you honestly think their homes aren’t going to get raided and pressure exerted to take their servers offline via illegal torture methods?

No it wouldn’t kill steem entirely, but it would bury it in even more obscurity for a while: whose gonna want to be a witness if the last one ‘disappeared’…?

NB – does anyone know whether it’s possible to erase stuff on the blockchain, surely it must be…. ‘immutable’ can’t actually mean ‘immutable’, surely a future HF could erase certain material if necessary?

Probably the most obvious way in which steem is truly global, and increasingly global is in way it brings together people from across the globe, commenting on each other’s posts, playing @steemmonsters together, and working on collaborative projects, both on the steem platform, and on discord.

According to @eroche, the breakdown of steem user accounts at the beginning of 2018 looked like this:

NB – I am sure this is much more global now, but it is testimony to just how unbelievably shit steem’s content database is that I just couldn’t find anything more recent, even though I know there is!

Of course I could also go all gooey over the fact that SF3 had people in attendance from almost 50 countries, and for a blockchain that’s only a couple of years old, that’s pretty impressive – from 0 to 300 odd people from so many countries meeting in Krakow: there are not many ‘instiuttions’ which can claim to have achieved that!

Steem as a challenge to the global fiat economy?

As with many (not all) cryptos, steem offers us an alternative token of exchange to Fiat – and given the near instananeous and fee-free transactions, it really is a way of sending money to people anywhere in the world with no hassle at all.

And, unlike with Fiat, it’s value is potentiallly more secure, because the inflation rate is determined by us, rather than a bunch of rish white male cowboys behind closed doors. I say potentially, because there is the every so tiny problem of crypto-speculation and manipulation by whales that makes the value volatile, but then again, the very wealthy can do this with fiat just as much as they can with crypto: most of us in the west just haven’t experienced this in our generation!

This I think is the real value of steem: as an alternative token of exchange with expandable utility – IF there’s enough trust in it, and enough people offering services in exchange for it, we don’t need fiat, at least once we’ve bought, or earned some of it!

And especially for people living in poorer countries, something like steem does seem to be one way in which they could earn a reaosnable ‘second income’ through various means.

Although ATW, what with the current steem price heading south ($0.47!) it’s probably more of a case of the witnesses finding it a challenge to pay for their servers, rather than steem challenging the relevance of Fiat!

It’s maybe ironic that this is the least global aspect of steem, at least according to steemnodes.com – all you need to do is to look at the map below to see that the blockchain is stored mainly in America and Europe… 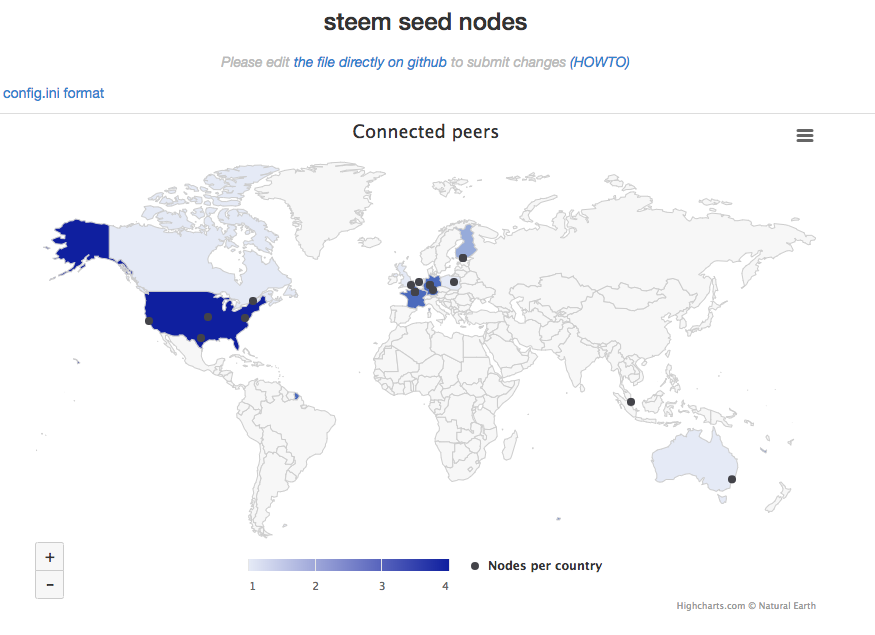 I guess at this point in time, this just mirrors where the technical expertise is, as well as the money required to be able to maintain a server. Of course this might change as/ if steem grows.

As a final note, I’ll just quickly post a question to any witnesses who may be reading this: if steem is going to become the next Facebook, how much does the ‘talent pool’ have to grow in order to maintain the servers that are going to store the exponentially increasing amount of data?

I mean at the moment, it seems to me that steem is mainly run by a handful of individual witnesses, and I guess that’s possible when we’ve only got 60K active users, or thereabouts, but if we scale up to 600K or 6 million, let alone 600 million, surely that’s not going to be manageable by handful of talented individuals like it is at the moment?

Is the idea that we’ll end up with thousands of witnesses all running more and more nodes? i only ask because i don’t ‘get’ this aspect of steem entirely!

Finally, of course its possible that steem might expand with data stored more globally, and in a more decentralised format, but (as I’ve said before), unless the witnesses are growing their own motherboards, surely they’re dependent on components manufactured in China, which raises questions about how genuinly decentralised the network is!