The friends I made at SteemFest 3 were of course priceless, but even if I disregard the impossible to measure emotional benefits of the connections I made, I’m still at least £45 up on the event. 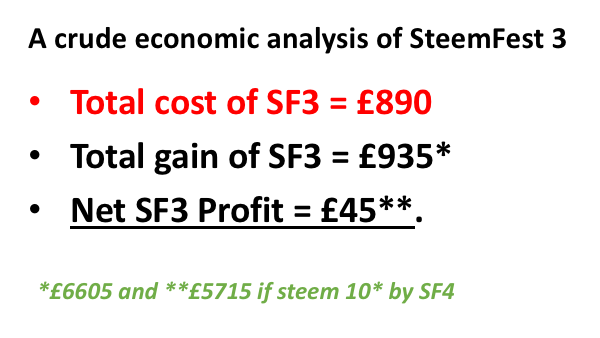 It may seem a little crude analysing such a fantabulous event in purely economic terms, and this analysis might only apply to me and my specific circumstances, but as I’ve calculated it if I look at things in the long term then I’ve just had a five day free-holiday, which just makes me think even more fondly of Krakow and all things steem.

A crude and rough cost benefit analysis of SF3 in purely economic terms. 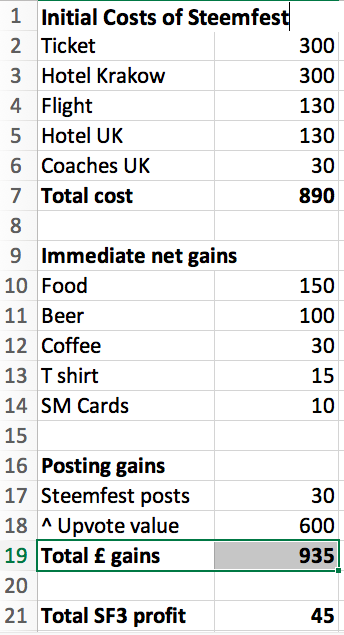 I paid in full for SteemFest 3 and didn’t claim anything from the reimbursement fund. If I add up the cost of the early (Minnow at the time) ticket, the flight , the hotels and the transport within the UK I get a figure of approx. £890.

I figured it’s fair to minus from these costs what it would have cost me to buy the amount of ‘on tap’ food, alcohol and coffee I consumed over those five days and the value of the free gifts (a T shirt and some @steemmonsters cards, the later activated via an alt account, shoot me now if you must) I received  = approx. £305.

Finally, I also need to factor in the ‘extra money’ I earned on my SF3 posts plus the additional anticipated additional vote-value for the coming year gained from people I met at SF3 who either hadn’t voted for me before or who now vote me more (approx. £630), then I get a figure of approx. £935.

I’ve done the additional value over a year so I get a SteemFest to SteemFest figure.

So in a nutshell, I get these figures….

(P.S. If you are one of those ‘additional people’, HI, and soz I’m a bit obsessed with early retirement and financial freedom so I do this sort of thing all the time, just less so this last couple of weeks. Here’s my latest ERE post, definitely due another one soon!).

Difficulties with doing the calculations

The most difficult thing in doing an economic cost benefit analysis of SF3 is the fluctuating (hopefully long term away from down) price of steem. In my calculations above, I’ve just held the value of steem at a constant £1, which is roughly what it was when I bought my ticket back in August.

This may mean my analysis here is just pants, but in my head it, you have to just give steem a constant value over time to do this sort of ‘long term gain’ analysis. Obviously if seem rises further, I gain more, if it falls, I end up with a net loss.

Also, the additional upvote value figures are pretty rough, but I’m definitely getting better payouts now since doing a bit of socialising. I can’t honestly say it was ‘networking’… that may well have backfired.

NB all the prices are rough, some from memory: I figured what with steem being all over the place, there was nothing to be gained from doing a full-on accurate dig into the exact amounts I paid.

I know it’s crude, and I’m wondering whether it was all worth it in the end, maybe not… but at least on the basis of this hack-job of analysis (fiction?) I’ve convinced myself that SF4 is going to pay for itself, even if it’s on the other side of the world!

As a final word I was going to say that it’s not the money that matters, it’s the people that are important, but if I want to see those people again at SF4 and now I’m sans regular income, I might actually need SF4 to pay for itself…. I won’t have the proceeds of a recent flat sale to front the next one!