So congratulations to Mo Farah who won his first competitive marathon at only his third attempt this weekend– legend.

But at the same time commiserations to the families of the two men who died during the Cardiff half marathon, also this weekend. Heart attacks the pair of them, one in his 20s, running with his girlfriend, the other in his 30s, who apparently collapsed in front of his wife and one year old child on the finish line. 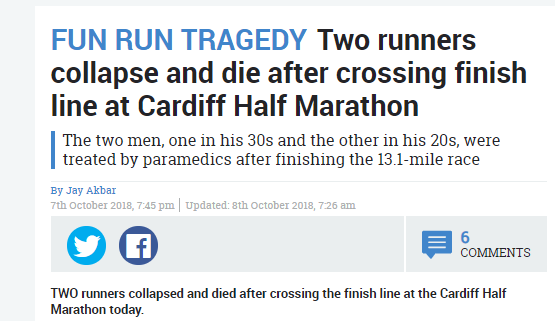 It seems that self-induced heart attacks are a regular feature of long-distance races. I remember someone dying during the local half marathon in Reigate back in 2014, and I remember personally feeling a bit funny towards the end of a particularly grueling 10K race around Box Hill on New Years Day 2016. I stopped and walked for a while at that point, my Garmin data later informed me my heart rate was at 225 beats a minute at that point… possibly that walk saved me from cardiac arrest?!?

The most comprehensive study I could find (published in the New England Journal of Medicine) looked at a total of 10.9 million runners who had completed half-marathons marathons between 2000 to 2010. During that period, 59 of the runners had heart attacks, and 42 of those died.

The breakdown of the stats is as follows:

3 things which are riskier than running

Of course I couldn’t resist this!

Stats taken from this highly reliable source of information.

So just keep on running

But if you really want to reduce your risk, run shorter distances, and just maybe keep it calm and if you do feel a little twinge, maybe just stop. Getting a PB’s probably not worth dying for!