Globally, 50 million people suffer from dementia, and this is set to treble to 150 million by 2050.

Most of us are familiar with at least some of the symptoms of dementia, such as memory loss and confusion, but according to Sandra Petersen, a professor of nursing at the University of Texas, most people don’t realise how truly horrific it can be… it comes to a point where you can’t trust yourself…. A fearful condition where you know something’s wrong, but you cannot figure out what it is.

One little understood symptom associated with dementia is Sundown Syndrome, in which patients experience an increase in anxiety as afternoon turns into evening. This transition turns some usually quite amiable patients into irritable and even violent patients.

Such symptoms are usually dealt with by medication (some dementia patients are on more than a dozen different meds), however, a relatively new approach is to use robots to interact with dementia patients: acting a sort of more reliable pet.

One such example of this is ‘PARO’, a therapeutic robot seal developed by Japan’s National Institute of Advanced Industrial Science, which is widely in Asia as well as Europe and America. PARO has been commercially available since 2004, following a decade of development, and a new one costs about $6000. 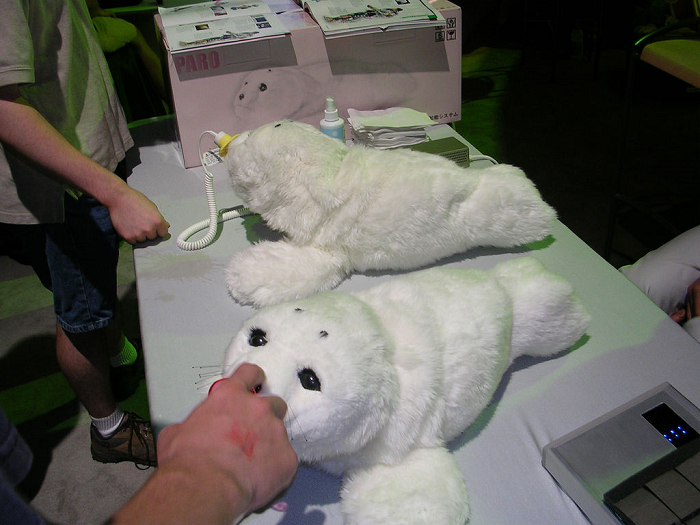 The choice of a robotic seal (rather than a dog for example) was deliberate – the idea being that no one has a bad childhood memory or a seal, whereas this could easily be the case with more common domestic animals.

PARO responds to sound and touch: if you speak softly to it, or stroke it, it will make gurgling and cooing sounds. If you speak harshly to it, it will stop and try something else to please you. It is about the size of a human infant, and apparently if you pick it up, it evokes the feeling of holding a small infant human, which again is quite deliberate.

The advantages of using AI in dementia care

People who work with dementia patients refer to it as a ‘Furry Miracle’……. Stroking and holding it alleviates anxiety for patients, and holding one also means they are less likely to start wandering about in an agitated state, and so less likely to injure themselves during their anxious phases.

Then there’s the fact that it can be there nearly 24/7. Other than the need for a recharge or a service, it doesn’t need to be fed or watered, and it never gets bored of ‘care-giving’. Unlike real pets, it can’t have an off-day, and it will never react aggressively towards patients.

Then there is the often-overlooked fact that the PARO allows patients to give care as well as to receive care.

NB – there are some examples of the PARO resulting in profound improvements in dementia patients…… one patient in Texas with Alzheimer’s who hadn’t spoken in 8 years picked one up, cradle it and whispered ‘I love you’ into its fur.

The potential downsides of using AI to alleviate dementia symptoms.

One of guiding ethical principles surrounding the development of AI is that it shouldn’t be used to deceive people, and there’s a chance that with dementia, this is precisely what’s occurring. While the nurses who work with them always introduce them as robots to patients, dementia patients can forget this, so the question remains: are we technically deceiving dementia patients.

At present level of technological development, there aren’t too many other issues to worry about, but as AI becomes more ‘human’ and as its use in elderly care expands, we’ll have to think carefully about issues of data privacy (as robots store more data from patients) and how this outsourcing of care changes wider social relations.