However, there are strategies that anyone who is addicted can employ NOW, and with a relatively small effort, it’s possible to turn this around.

I’m ‘happy’ to admit that I feel compulsion to be on my phone much of the time, rather than choosing to use it, and I use all the strategies below, every day.

Seven strategies you COULD use to regain control over your Smartphone

NB – probably unsurprisingly, most of these involve techniques to simply use your phone less! 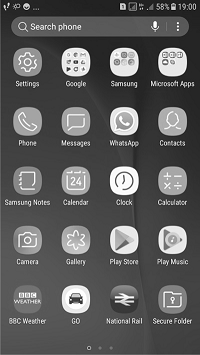 I go this idea from Aza Raskin, the ‘tech Oppenheimer’ who invented the perpetual scroll. Knowing how anxiety inducing the red notification symbols are, and simply how much more enticing anything in colour is, he keeps his own phone in monochrome – basically greyscale in order to ‘reduce the dopamine release just a little bit and put himself just that little bit more back in control of the device’.

I switched over a few days ago, and besides a dodgy moment when I got my first greyscale phone call (no red/ green colour cues for accept or reject!) it’s made the phone much less exciting, which is just absolutely fabulous!

Another technique Aza Raskin uses. Just having a blank home screen with nothing on would obviously be a lot calmer, and a lot hectic than the usual 12 apps per screen, all with their little indicator buttons calling on you to do something!

I bought a cheapy alarm clock about a year ago, so I could stop relying on my phone alarm, and just turn the damn thing off overnight. I went through a phase of using the alarm clock and putting the phone in a drawer overnight. Combined with number four below, this sometimes gave me 10-12 hours of non-phone time!

1/3rd of UK adults check their phones during the night… which is a terrible idea as the light/ brain stimulation seriously hinder your ability to get a quality night’s sleep.

I would say this is THE MOST IMPORTANT thing to do to get off yer phone and improve the quality of your sleep and thus your life!

If you want to check out why I think sleep is so important, see this post… on ‘Why We Sleep’.

While number 3 above is the most important, I guess this will be the most difficult for a lot of people: getting over that urge to check yer phone first thing in the morning. I’m actually pretty crap at doing this myself, but on those days when I do just leave it for an hour or two, it’s a much ‘clearer’ start to the day.

I’m not anti-phone – rather I’m pro ‘controlled usage’ of the phone (and social media, I tend to conflate the two), and the way I try (and quite often fail btw) to do this is to have ‘usage periods’ during the day. My ‘REALISTIC timetable’ looks something like this: 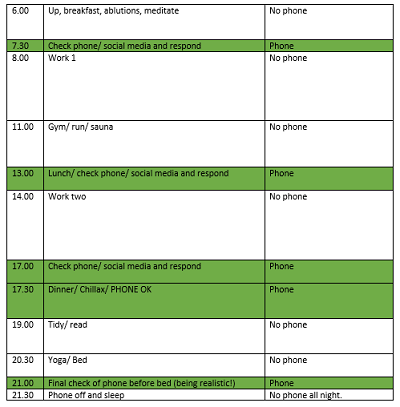 I imagine most people would need longer ‘on periods’, it all depends on how important the connectivity your phone brings you is to your life. NB that’s an important question to reflect on!

I got this tip from some co-workers, and it’s worked a treat: NOT checking my phone every five, or even every fifteen minutes means I’m much more focused during work periods. As you can see from the TT above, I try for three quite long periods without phone use every day.

I’ve included this last, because this is really a means to the ends above. I downloaded realizd a couple of months ago, an app which tells you how many times you check your phone in a day etc. I was literally ‘shocked’ into taking action. Now I don’t use the app anymore, but fair play to it, it gave me a wake up call.

If you want to check out my review of the Realizd app, check out this post.

I’ve noticed after my last iPad software update that Apple have now integrated this device-usage information as standard, good on them!

While the design features of smartphones and the social media apps we run off them do seem to have habit-forming tendencies, in that that they compel us to use them more than we might really want to, it is possible to take a bit of responsibility and turn this around!

I’m far from perfect in sticking to all of the above. I’ve been especially lax during the last three months while I’ve been between houses, and reliant on my phone as a mobile hotspot, but now I’m settled again, and I’m getting my BB connection installed next week, the phone’s going to be A LOT less visible!

This information is written purely for entertainment purposes only, it is not meant as advice.