22 year old Olivia Bland was left in tears recently after a torrid two hour interview for a job as a communications assistant with Webb Applications UK. Apparently Craig Dean, the CEO, was so unpleasant and derisory she ended up in tears afterwards.

The interview consisted of him ripping apart the answers to a proofreading test she’d done in a previous round of interviews and seemingly irrelevant personal questions such as ‘are your parents still together, as well as Craig Dean scrolling through her Spotify playlist and critiquing her taste in music,

There were also two other female employees present, who did nothing but observe the whole process, possibly there just to make the situation more stressful and witness Bland’s humiliation.

Oddly enough, Bland was actually offered the job, but turned it down, outlining the reasons why she didn’t want to work for the company, and she posted the rejection on twitter, which got a lot of attention. 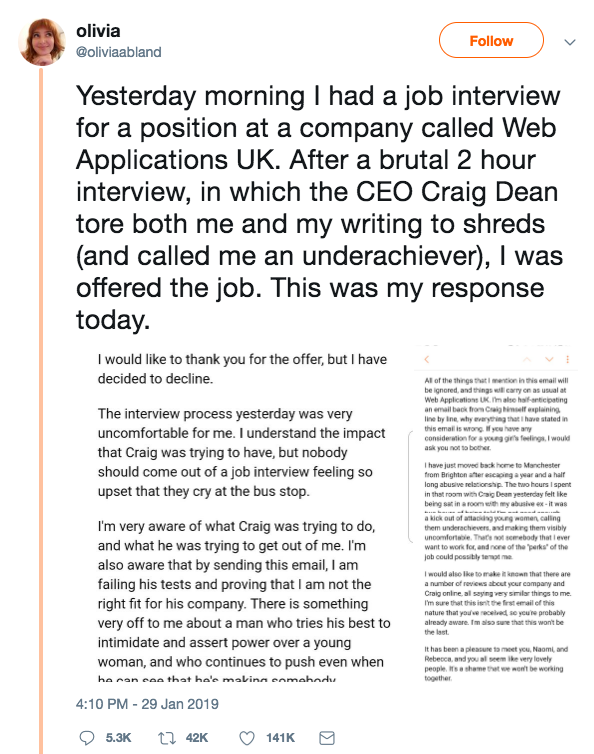 A clever way to turn around a bleak situation!

As far as I see it here is one smart young lady really making the most out this opportunity…. in the absence of a job worth taking (I mean who would want to work in such an environment?) why not milk it…. I mean, there’s the bullying CEO (with witnesses) who hasn’t denied conducting the ‘stress interview’ and there’s here: the delicate young female (she’s got the whole ‘clean and cutsie’ thing going on on her social media profiles) – it’s the perfect character contrast for media simplification; then there’s the fact she must have known this whole stress interview and machismo in tech land is pretty common – and you’ve got a story that’s probably going to do well.

I’m not surprised it took her less than 24 hours from job offer to rejection letter on twitter – now she’s got publicity for profile and apparently a whole load of companies asking her to apply for similar jobs. Quite a turnaround!

Why the stress interview?

Gender scripts aside (and failing to take account of these was a big mistake by Craig Dean)…. I’m appalled at the whole notion of the stress interview… it just reminds me that so many jobs are just so full-on, 50+ hour a week affairs that demand such a pace of work constantly… hence the felt-need for said interviews.

And why are so many jobs like this so stressful… it’s just down to competition and time pressure I guess: profitability frequently depends on being the first to release something and on rapid communications, which means if you want a high paying job in tech and communications, you’ve got to be ‘on it’ for 50 + hours a week.

Personally I’m done with such jobs, just give me simple and stress free and less money from now on please!

My heart really does go out to anyone whose just graduated and looking to get their first job – there’s 3 decades of pain ahead of you right there!