It seems that the global elite are concerned about slowing economic growth, among other things.

According to a survey of the financiers, CEOs and politicians (in order of hierarchy?) 90% of them are worried about the prospect of a major ‘economic confrontation’, and the majority are anxious about ‘populist and nativist agendas’ and ‘public anger against elites’.

Could this be a case of ‘chickens finally coming home to roost’? For decades these elites have conspired at Davos and other international economic forums to create a global neoliberal economic system which has allowed the world’s largest Corporations (especially the tech companies) to dodge paying tax in pretty much any country genuinely involved in their supply chain, which has led to the top global 0.1% getting a lot richer than the rest of us, and trillions of dollars in profits being stashed away in tax havens, waiting for a profitable investment opportunity.

The problem is that those profitable investment opportunities don’t seem to be coming around as often as they used to – probably because stagnating wages (caused at least in part by the sucking of profit to the top) have resulted in restricted demand.

While it is true that globalisation has lifted hundreds of millions of people out of absolute poverty in developing countries, most of these hardly earn enough to fuel demand for super high tech products, or really expensive products like cars; and in the developed world, the middle and lower classes (the majority) have experienced stagnant wages since the crash of 2008.

Maybe this is why we’re seeing something of a backlash against ‘politics as usual’ – Brexit and Trump, and the rise of more extreme political views?

If only people could properly wake up to the role of the global elites in causing economic insecurity and hardship, rather than blaming ordinary people just like them in neighbouring countries?

Oh, and don’t expect the global elite to suddenly develop a social consciousness – ‘overregulation’ is still firmly top of their ‘threats to economic growth’ list and (worryingly) climate change doesn’t even hit the top ten.

mAIN THREATS TO ECONOMIC GROWTH ACCORDING TO THE WORLD’S GLOBAL CEOS: 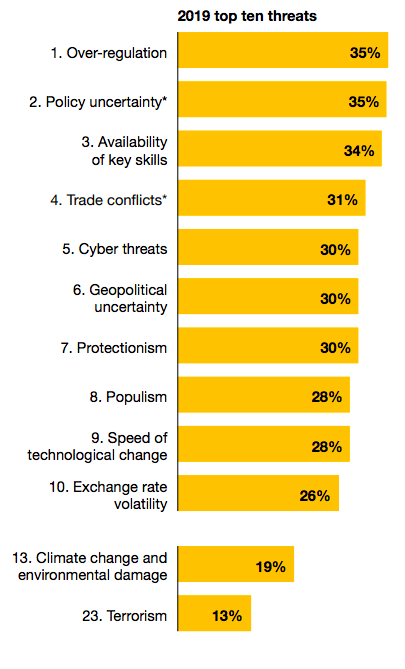 The above just seems to suggest their solutions to the anticipated global slowdown is more of the same neoliberal policies that got us into this mess in the first place.

One thing seems clear from the above, don’t expect the global elite to sort out our global economic problems, they are firmly committed to business as usual!

Panic is on the Agenda at Davos (Guardian)